Lenovo’s driver download portal was discovered to be compromised and was found serving malware this weekend. 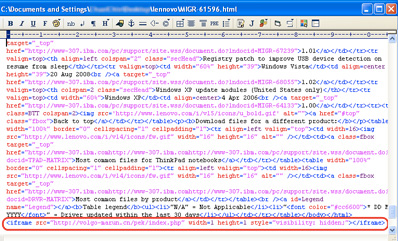 A hidden iframe inserted in the page was redirecting users to , where a file named exe.exe was waiting to be loaded through exploits taking advantage of many vulnerabilities in the Internet Explorer browser.

According to Bkis, the file is a variant of the Bredolab Trojan, which proceeds to copy itself as %Programs%\Startup\monskc32.exe and contacts and receives further instruction from a C&C server located on the sicha-linna8.com domain.

H Security reports that Lenovo seems to have remove the iframe from the affected pages, but recommends that all those people who have visited Lenovo’s site in the last couple of days do a security scan of their computers. So far, only 10 of the 40 tested AV solutions on Virus Total detect the malicious file, but since the path where the Trojan copies itself is known, a peek under the hub is enough to find out if you have been infected.