iPad’s instant popularity is – by now – the stuff of legends, and the possibility of receiving it as a reward for being a BETA tester, participating in a survey or any similar low-effort-great-reward type of scheme, still hasn’t lost its allure.

If it had, we wouldn’t be seeing messages such as these on Facebook (or, for that matter, anywhere on the Internet):

The shortened link takes the naive user to a page that says that 5,000 BETA testers for the iPad are wanted, and that after testing the device for 2 months, the testers will get to keep it as payment/reward for their trouble.

To be a part of this testing group, the victim needs only to apply by sharing their contact information and the key (i.e. the password) to their email account: 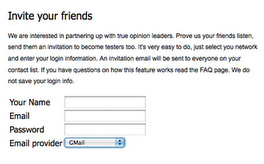 Zscaler warns that if the victims fail to realize that this last request doesn’t seem quite right, they will be falling pray to a well known group of scammers who have a history of using the iPad lure in order to phish for user credentials.