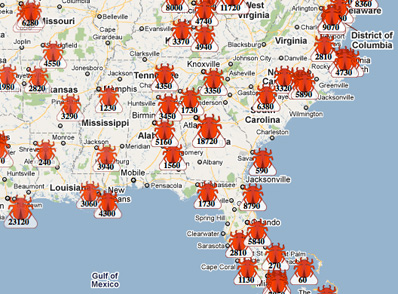 Enigma recently pulled a 30-day history of infections in the 100 largest cities in the United States. Not surprisingly, New York City had the most infections—because New York has the most computers. But when the number of infections was factored in as a percentage of a city’s population, New York ended up near the bottom of the list and Atlanta, Georgia came out on top.

“Malware makers are becoming more and more sophisticated, and the risk they pose to your computer and your valuable personal information is growing,” says Enigma Software Group CEO Alvin Estevez. “We think it’s important to keep an eye on where the malware is doing the most damage and our Malware Tracker map helps us and consumers know what’s going on.”

Here’s where some large cities of note ranked on the list (remember, the lower the number, the HIGHER the infection rate)