Legitimate businesses use all that the Internet offers to make their sales go up. And even though the use of social media tools can affect office productivity and be an entry point for online attacks, a smart company leadership will find a way to minimize the risks while maximizing the benefits.

Facebook, Twitter and YouTube accounts are becoming the norm and a must for a successful business, but it would be erroneous to think that only legitimate businesses can take advantage of them.

Advertising their wares on underground forum is how criminals usually try to sell their illegal wares, but Trend Micro has recently discovered an instance where criminals availed themselves of the possibility to post a video on YouTube in order to showcase how their DDoS tool works: 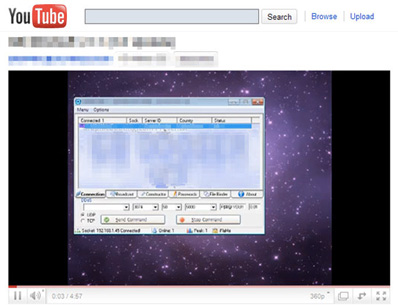 The video has since been taken down by YouTube, but not before the researchers were able to notice that the price ($15) and the URL where the tool can be bought were listed, and that the video has been viewed more than 600 times. It’s anyone’s guess how many of those views have been converted into successful sales.