Sophos has released the Sophos Windows Shortcut Exploit Protection Tool, which protects against a vulnerability that allows malicious hackers to exploit a bug in the way that all versions of Windows handles .LNK shortcut files.

If Windows just displays the icon of an exploited shortcut file, malicious code can be executed – without requiring any interaction by the user, but Sophos’s tool intercepts shortcut files that contain the exploit, warning of the executable code that was attempting to run. That means it will stop malicious threats which use the vulnerability if they are on non-local disks, such as a USB stick. 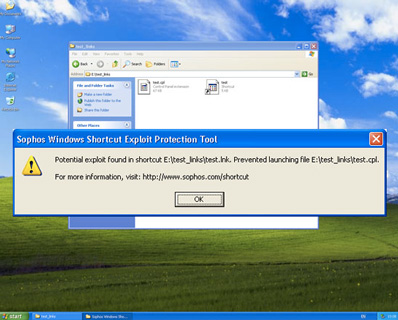 “So far we have seen the Stuxnet and Dulkis worms, as well as the Chymin Trojan horse, exploiting the shortcut vulnerability to help them spread and infect computer systems. Stuxnet made the headlines because it targeted the Siemens SCADA systems that look after critical infrastructure like power plants – but there’s a warning for all computer users here,” said Graham Cluley, senior technology consultant at Sophos. “Details of how to exploit the security hole are now published on the web, meaning it is child’s play for other hackers to take advantage and create attacks.”

“No-one knows when Microsoft will roll-out a proper patch for this critical security hole, and its current workaround leaves systems almost unworkable with broken-looking icons,” continued Cluley. “The free tool from Sophos can be run alongside any existing anti-virus software, providing generic protection against the exploit. Unlike Microsoft’s workaround, it doesn’t blank out all the shortcuts on your Windows Start Menu – meaning your life – and that of your users – will be less stressful.”