Sophos published the mid-year 2010 Security Threat Report, revealing the findings of a survey into attitudes towards cyberwarfare and detailing other trends and developments in IT security for the first half of 2010. 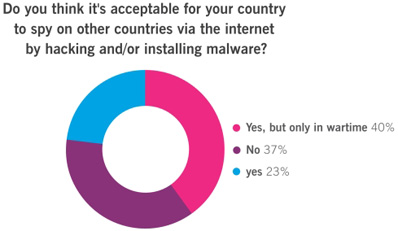 Sophos’s worldwide survey of 1077 computer users uncovers some alarming attitudes towards international cyber-espionage. Respondents were asked questions including whether they thought spying via hacking or malware attacks is an acceptable practice and if the computer networks of private companies in other countries are legitimate targets.

Some of the key findings of the survey indicate a relaxed attitude to state-sponsored cybercrime:

“It’s perhaps surprising that so many people seem to think that using the internet as a tool for spying, or even as a weapon, is acceptable practice,” said Graham Cluley, senior technology consultant at Sophos. “After all, by giving the green light to these kind of activities you’d also have to expect to be on the receiving end too. Maybe yours will be the next company probed by an overseas power?”

‘Operation Aurora’, which first came to light at the start of the year, resulted in Google accusing Chinese hackers of cyberwarfare, as its systems, and those of other companies, were hit with targeted attacks, potentially signalling the most obvious sign yet of a new age of malware.