Malware has reached its highest levels, making the first six months of 2010 the most active half-year ever for total malware production, according to a new McAfee report. At the same time, spam leveled out with only 2.5 percent growth from Q1 2010.

Malware continued to soar in Q2 2010, as there were 10 million new pieces cataloged in the first half of this year. Consistent with last quarter, threats on portable storage devices took the lead for the most popular malware, followed by fake anti-virus software and social media specific malware.

With approximately 55,000 new pieces of malware that appear everyday, globally AutoRun malware and password-stealing Trojans round out the Top Two malware threats.

After reaching its highest point in Q3 2009, with nearly 175 billion messages per day spam rates have hit a plateau. Cybercriminals took advantage of anticipation on and hype of the FIFA World Cup in South Africa, and used various methods to promote scams and search-engine “poisoning.”

Globally, the most popular types of spam varied from country to country with some interesting findings. For instance, delivery status notifications, or non-delivery receipt spam, were the most popular in United States, Italy, Spain, China, Great Britain, Brazil, Germany and Australia. 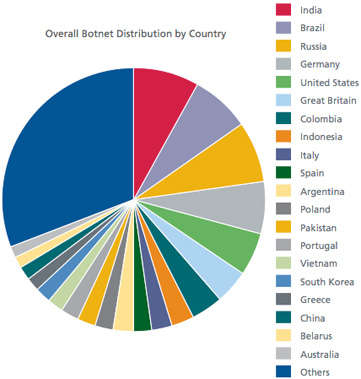 Malware spam, or anything that comes with a virus or Trojan attachment urging you to visit an infected website, was the most popular in Colombia, India, South Korea, Russia and Vietnam. Argentina had the most variety in spam, with 16 different topic areas, ranging from drugs to lonely women to diplomas. Italy came in with the least variety, with just six types of spam.

Attackers leveraged major events such as the World Cup and Middle East conflicts to poison Internet searches, however the BP oil spill in the Gulf of Mexico was surprisingly absent from the Top 20 toxic search terms. Additionally, McAfee Labs saw a resurrection of two “dead” botnets. Storm Worm and Kraken, once considered to be among the biggest botnets on the planet, are again on the rise.