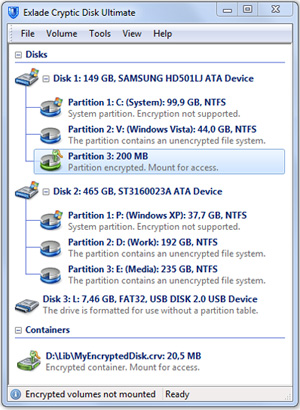 The new release of the disk encryption software saw an overhaul in the data encryption process: the list of algorithms was considerably expanded, and a cascade encryption method (where multiple algorithms are used sequentially in any order to encrypt data) was added to augment protection against any possible attacks from hackers. Thanks to the use of this method, encryption key size jumps from 256 to 2944 bits, which certainly boosts both encryption strength and reliability.

An additional method to protect information is to create hidden encrypted disks inside of already existing ones (i.e., steganography), with up to three layers of nesting. This serves to deceive potential adversaries into thinking that no disk encryption software is present, when the opposite is in fact the case.

The new version has built-in protection from brute force password attacks, as well as a virtual keyboard which serves to reliably protect user-entered passwords from keyloggers.