A Trojan imitating a Microsoft Security Essentials Alert has been spotted trying to convince users that their computer is infected and that the only thing to do is to pay for one of the five fake antivirus solutions offered. 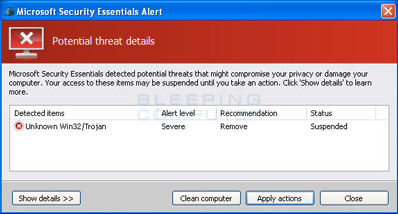 Whether you click on the “Clean computer” or the “Apply actions” button, you are told that the program can’t clean your computer and prompted to use an online scanner, reports Lawrence Abrams of Bleeping Computer.

Your computer is purportedly scanned by 35 antivirus solutions – 30 legitimate and 5 fake – but only the fake ones (Red Cross Antivirus, Peak Protection 2010, Pest Detector 4.1, Major Defense Kit, AntiSpySafeguard) “detect” the Trojan.

In fact, all of these fake solutions are one and the same, but with different names and graphical user interfaces. Whichever you choose to install, it will reboot your computer, run automatically and begin a fake scan.

The result is always the same: your computer is full of malware. The fake AV has managed to clean some of it, but there are still numerous infected files that only the full (paid) version can remove.

The program also terminates some of the other programs you attempt to start, saying that they are also infected. You can also see some fake warning alerts popping up here and there which prod you to buy the full version, but don’t fall for it.