Vulnerability disclosures are increasing dramatically, having reached record levels for the first half of 2010, according to the IBM X-Force 2010 Mid-Year Trend and Risk Report released today.

Overall, 4,396 new vulnerabilities were documented by the X-Force Research and Development team in the first half of 2010, a 36 percent increase over the same time period last year. Over half, 55 percent, of all these disclosed vulnerabilities had no vendor-supplied patch at the end of the period.

According to the report, Web application vulnerabilities continued to be the leading threat, accounting for more than half of all public disclosures. In addition, covert attacks increased in complexity hidden within JavaScript and PDFs, while cloud and virtualization were noted as key future topics for enterprise organizations. 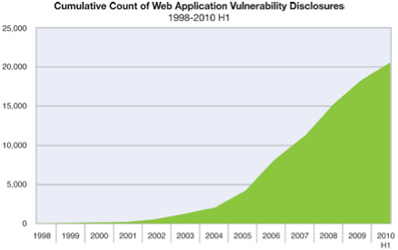 Covert, hidden attack methods grew in frequency and complexity, especially involving JavaScript – Enterprises are fighting increasingly sophisticated attacks on their computer networks, including advanced persistent threats. These sophisticated attackers are employing covert means to break into networks without being detected by traditional security tools. JavaScript obfuscation is a particularly popular technique used by all classes of computer criminals to hide their exploits within document files and Web pages. IBM detected a 52% increase in obfuscated attacks during the first half of 2010 versus the same period in 2009.

PDF exploits continue to soar as attackers trick users in new ways – X-Force started observing widespread use of PDF-based exploits during the first half of 2009. Since then, it has captured three of the top five slots for browser exploits used in the wild. The most significant jump associated with PDF attacks occurred in April, when event activity was almost 37 percent higher than the average for the first half of 2010. IBM also detected this widespread spam campaign, noting that the Zeus and Pushdo botnets, some of the most malicious internet threats, also helped to spread these infected PDF attachments.

Phishing activity declined significantly, but financial institutions remain the top target – Phishing volume has fluctuated wildly over the past few years. The first half of 2010 has only seen a fraction of the phishing attacks that were seen at the peak in 2009, a decline of almost 82%. Despite this drastic decline, financial institutions are still the number one phishing target, representing about 49 percent of all phishing emails, while credit cards, governmental organizations, online payment institutions and auctions represent the majority of other targets. 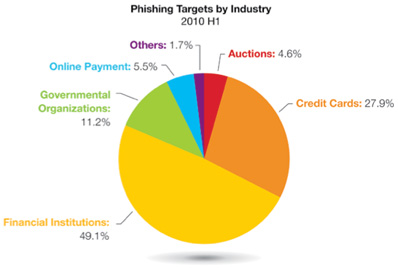 X-Force Research and Development team has identified some key trends to watch for in the future, including:

Cloud computing — As an emerging technology, security concerns remain a hurdle for organizations looking to adopt cloud computing. As organizations transition to the cloud, IBM recommends that they start by examining the security requirements of the workloads they intend to host in the cloud, rather than starting with an examination of different potential service providers. Getting a good understanding of the needs and requirements first will help inform a more strategic approach to adopting cloud services.

Virtualization — As organizations push workloads into virtual server infrastructures to take advantage of ever increasing CPU performance, questions have been raised about the wisdom of sharing workloads with different security requirements on the same physical hardware. X-Force’s vulnerability data shows that 35% of vulnerabilities impacting server class virtualization systems affect the hypervisor, which means that an attacker with control of one virtual system may be able to manipulate other systems on the same machine. This is a significant data point when architecting virtualization projects.