Scammers and spammers have deluged the new Ping musical social network, created by Apple and built into the new version of iTunes.

Ping is a cross-between Facebook and Twitter, giving over 160 million iTunes users the ability to build networks of friends and musicians, and read comments by other fans.

Sophos researchers have found that Ping is being over-run by scams and spam messages, some of which try and direct users into believing they will receive a free iPhone if they complete online surveys. 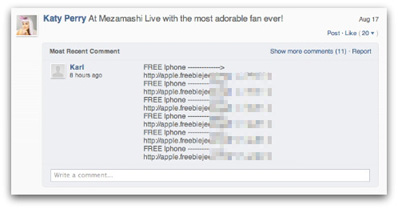 “We’re used to survey scams like this being spread far and wide via sites like Facebook, but clearly the lack of filtering on Ping is making it a brand new playground for the bad guys to operate in,” said Graham Cluley, senior technology consultant for Sophos.

“It’s ironic that the most common scams on Ping right now revolve around Apple’s own iPhone. It’s safe to assume that Ping does incorporate some rudimentary filtering to prevent offensive messages from being posted, so hopefully Apple’s security team can extend this to also block scam messages and malicious links. In the meantime, though, Ping users should be wary of believing what they read on the new service.”

Sophos published research earlier this year demonstrating that there had been a 70% increase in the number of users reporting spam and malware being spread via social networks, a trend which continues to grow.

“As more companies jump on the social networking bandwagon they must think carefully about what they are going to do to make their communities a safe place for users to hang out,” continued Cluley. “If they’re complacent about these sorts of security risks then users may end up voting with their feet, and find a safer place to spend their online time.”