The “Here you have” virus, which first appeared about a month ago, is a worm that has spread widely via email using social engineering (the name of the virus stems from the subject of the messages used to spread it). 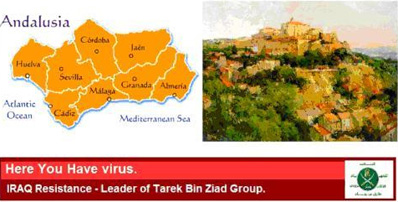 Responsibility for this worm, which has already hit many multinationals and organizations including Proctor & Gamble, Disney, Wells Fargo and NASA, has been claimed by an Iraqi resistance group, Tariq ibn Ziyad, who may be based in Spain, according to investigations by PandaLabs.

In a video on YouTube created by the “IRAQ Resistance – Leader of Tarek Bin Ziad Group”, and posted last Sunday, September 12 by iqziad, (26 years old, resident in Spain), a metallic female voice explains the reasons why this group, supposedly based in Spain, have created and distributed the “Here you have” virus (classified by Panda Security as W32/Visal.A.worm).

The video claims the virus has been created and propagated principally to target the United States for two reasons: to commemorate the 9/11 attacks and to demand respect for Islam, with reference to the threat made by pastor Terry Jones to burn the Koran last week.

The video displays a static image of a map of Andalusia, Spain along with a photo and an emblem, presumably that of the group.

According to Luis Corrons, Technical Director of PandaLabs, “We have passed on our knowledge of this issue to the Spanish Civil Guard’s Digital Crime Unit for their investigation. Signs appear to show that the group responsible for this virus could be resident in Spain, not just because of the information presented through YouTube, but also because of certain aspects of the virus code itself. There is also the link between the name of the group and the Berber general who led the conquest of Al-Andalus”.

Tariq ibn Ziyad (died in 720) was a Berber commander who led the Muslim invasion of the Iberian Peninsula in the eighth century, conquering Visigoth Hispania, according to generally accepted history based on the Arab chronicles of the 10th and 11th Centuries.