An application for the iPhone and Android-running devices that allows users to establish the exact location of an airplane by simply pointing it in its direction while it glides through the sky has made a lot of security expert call for a ban. 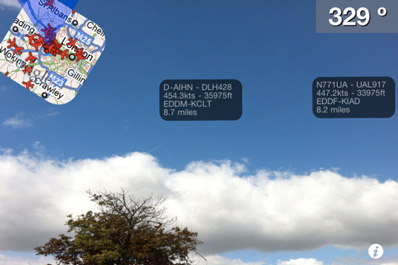 The application – called Plane Finder AR – was developed by British company Pinkfroot and is currently being sold on online app markets for the cheap price of £1.79. It shows the current position, height, speed, airline name, flight number, departure point and destination, and the probable course of the targeted plane, and it manages to do so by intercepting transmissions from the Automatic Dependent Surveillance – Broadcasts (ADS-B) located on most passenger planes to a satellite tracking system.

According to the Daily Mail, many security experts are worried that the application can be used by terrorists to target commercial planes with missiles – a thing they have been known to do in the past – and the U.S. DHS is already looking into the problem.

Lee Armstrong, the director of Pinkfroot, says that they have not received any objection from governments, and that they have simply “packaged information that is freely broadcast”. Also, he points out that the application provides the data that is not exactly precise – it delays the information by 30 seconds, so that the risk for misuse is reduced.

“If someone really wants to do that [shoot down a jet] they could buy their own ADS-B or radar,” he says. “This application might be new but the ability to track aircraft isn’t,” said the spokesman for the U.K. Department for Transport.

And, in the end, maybe the whole hoopla about this application might be a little overdone, since it can’t detect planes that don’t have ADS-B equipment, and doesn’t work in areas where the company has no feeds.