During the first half of 2010, Europe sped through the spam-generating fast-lane, bypassing North and South Americas, and Asia-Pacific to earn the “Top Producer of Spam” title.

Malicious URLs increased from 1.5 billion in January to over 3.5 billion in June. North America sourced the most malicious URLs, while Asia-Pacific had the most victims of malware infections. The top URLs blocked by Trend Micro were adult websites, as well as sites that hosted malicious variants such as IFRAME code, TROJ_AGENT, and JS_DLOADR.ATF.

TrendLabs now handles around 250,000 samples each day. Recent estimates though place the number of unique new malware samples introduced in a single day at greater than 60,000.

India and Brazil distinguished themselves by having the most botted computers, tools of choice by cybercriminals building botnets for distributing malware, perpetrating attacks and sending spam. Botnet herders – the cybercriminals behind the botnets — earn millions of dollars in money stolen from innocent computer users. 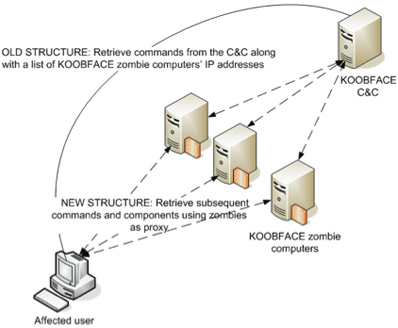 ZeuS and KOOBFACE made the most impact during the first half of 2010. ZeuS, crafted by an Eastern European organized crime network, is primarily a crimeware kit designed to steal users’ online banking login credentials and other personal data. Small businesses and their banks are targeted by the thieves. Hundreds of new ZeuS variants are seen by Trend Micro every day, and this is not likely to change in the near future.

The KOOBFACE botnet achieved infamy as the largest social networking threat to date. In the early part of this year, TrendLabs experts noted that the KOOBFACE gang was continuously updating their botnet: changing the botnet’s architecture, introducing new component binaries, and merging the botnet’s functions with other binaries. They also began encrypting their command and control (C&C) communications to avoid monitoring and takedown by security researchers and the authorities.

Vulnerabilities in applications have always been a part of the security landscape. In the first half of 2010, Trend Micro threat researchers report a total of 2,552 Common Vulnerabilities and Exposures published, with many more that are privately reported to vendors and therefore not published externally.

For end users, vulnerabilities have facilitated “drive-by” threats, where all that is necessary to become infected by malware is to visit a compromised website. Servers are coming under attack as well, with cybercriminals exploiting un-patched vulnerabilities. While this may be more difficult than compromising a single user system, the potential reward for cybercriminals is greater.