It exceeds the functionality of Metasploit Express with support for security testing of custom Web applications, managing client-side campaigns against end-users and additional evasion features. 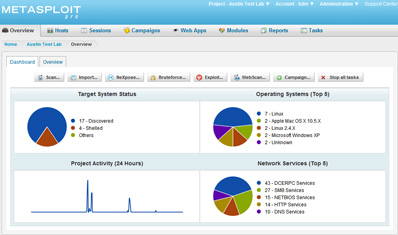 Achieves unprecedented network access. Metasploit Pro is the world’s only penetration testing solution to achieve unrestricted remote network access through a compromised host. Unlike alternative products, which provide proxy-based pivoting that is restricted to certain protocols, Metasploit Pro’s VPN pivoting evades firewall restrictions and provides encrypted access into networks at the Ethernet level, providing the same capabilities as a physical network tap. As a result, penetration testers can run any network discovery tool, such as the NeXpose vulnerability scanner, through a compromised host as if they were directly connected to the internal network.