Twitter users are often targeted with various fake messages purportedly coming from the microblogging service, and these e-mails usually try to trick the users into clicking on a malicious link by pretending that they have messages waiting for them.

This latest example is no exception: 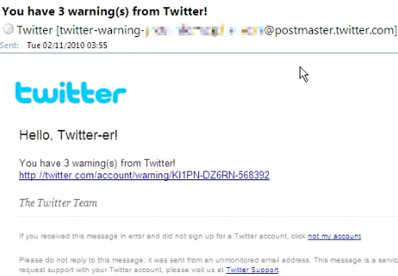 The link does, at first glance, really look like it’s pointing to a Twitter page, but rolling over it reveals that it does no such things.

Of course, people who aren’t paying attention can easily be fooled, but there should be no doubt in their mind that the message is fake when they land on a Canadian pharmacy site. And if they choose to buy anything from it, they can only blame themselves if they get fake medication or their credit card details stolen.