It seems that Firesheep has succeeded where similar tools have failed in the past: the issue of full end-to-end encryption for all websites – especially the most popular ones – is finally getting the attention it deserves.

And among those who view Firesheep’s advent as the perfect excuse to point out – and keep pointing out – the need for SSL use is George Ou.

He plans to keep an online services report card that will keep track of the changes that Facebook, Twitter, Gmail.com, Google.com, Microsoft Hotmail, Ebay, Flickr, WordPress and its implementations, Yahoo and Amazon execute to implement full end-to-end encryption, and what generic protocols are deemed safe. 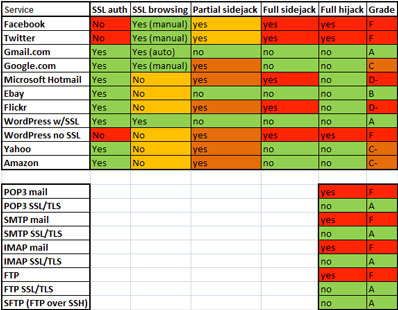 As you can see, only Gmail.com and WordPress free hosting site (which does implement SSL) get an “A” and are fully impervious to partial and full sidejacking and full hijacking of HTTP sessions, while Facebook, Twitter and Microsoft’s Hotmail e-mails service have a long way to go. Although, Microsoft is reportedly considering SSL implementation for some of their services.