PandaLabs warned that 40% of all fake antiviruses ever have been created this year. That is, ever since this type of malicious code was first reported four years ago, 5,651,786 unique rogueware strains have been detected, out of which 2,285,629 have appeared from January to October 2010. 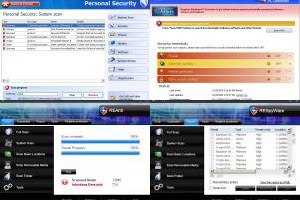 If we compare the number of rogueware specimens to the total number of malware strains included in their database, 11.6% of all samples correspond to fake antiviruses.

This is a staggering figure, especially if you consider that this database contains all malware detected in the company’s 21 year-history and rogueware only appeared four years ago.

Rogueware’s sophistication, realism and social engineering techniques are the basis of its success, as shown by the fact that more and more users are falling victim to this scam.

So far this year, 46.8% of all computers worldwide have become infected with some sort of malware, and 5.40% have been affected by rogueware.

Even though there are many different types of rogueware families and types, the top fake antiviruses are as follows:

Every new victim of a fake antivirus scam allows hackers to make money by selling antivirus licenses that users will actually never get, stealing credit card data they can sell on the black market and use to make online purchases, etc.

According to a study conducted by PandaLabs, “The Business of Rogueware”, rogueware authors make over $34 million a month (approximately $415 million a year).