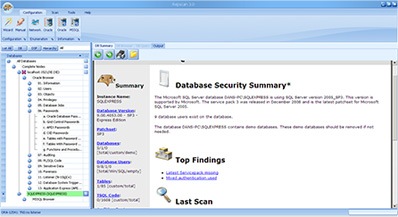 The new version includes 100’s of tests designed for the SQL Azure environment, and has been implemented to efficiently evaluate configuration parameters relevant for securing this emerging architecture.

Also new in Repscan 4.0 are a number of new features to simplify and speed common actions of DBAs as they work to remediate discovered vulnerabilities. For example, DBAs with appropriate account access and privileges can apply changes to one or more databases directly from within Repscan, addressing identified problems without leaving the tool.