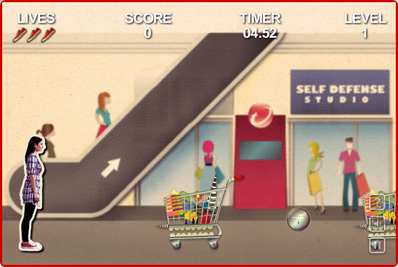 Titanium Power Up is reminiscent of classic arcade games like Super Mario Bros and Pitfall. There are multiple levels within the game that players must complete, with each level set in a unique environment with fun characters and challenges.

The game serves as a metaphor for the things people dislike about Internet security, such as slow speeds, annoying pop-ups and scary warnings; but instead of feeling intimidated and confused by such things, the game gives people the ability to overcome them.

The game also includes a sweepstakes component called the Titanium Power Up Giveaway. These instant prizes are awarded on a daily basis and there will be one Grand Prize awarded at the end of the sweepstakes, which ends on December 31, 2010. Players get one chance to win instantly each day; in addition, each day they play the game again gives them an extra entry into the grand prize drawing. Sweepstakes available to U.S. and U.K. residents only.

Players use their space bar and arrow keys to control a character with the objective being to avoid a variety of threats and obstacles, and defeat the “bad guy” at the end of each level. Points are earned in a variety of ways and a player’s final score can easily be shared with friends via Facebook and Twitter.