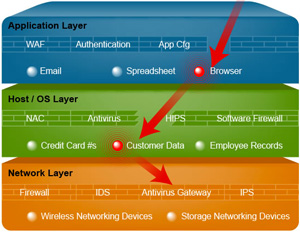 The latest round of new features allows customers to:

With IMPACT Pro 11 organizations can assess their exposure to attacks carried out against network devices. For instance, given control of a router’s configuration, an attacker could gain access to other networks that otherwise would not be detectable. An attacker with command of a switch could quietly steal and manipulate data, as well as inject their own malicious data into switch traffic.

Information gathering and fingerprinting: As a part of Network Information Gathering, IMPACT Pro will scan a range of IP addresses and return a list of discovered network devices as well as any identifying attributes (e.g., manufacturer, device/model, OS).

In addition to empowering users with its existing Reflective XSS attack capabilities, IMPACT Pro 11 enables them to exploit Persistent (or Stored) XSS vulnerabilities.

Persistent XSS is an insidious form of attack because it implants the vulnerable web application with malicious code, which subsequently runs against end user browsers that load the application. For instance, an attacker could target a vulnerable blog by adding a comment containing exploit script. As end users view the blog in their browsers, the script would run against their systems. Since Persistent XSS doesn’t require phishing to target end users, it can affect a larger population in a much more subversive way.