A surge in malicious shortened links accompanying messages that say I just won a free iphone and ipad! (or a variation of that message) has been spotted on yesterday morning on Twitter, and the messages are still going strong: 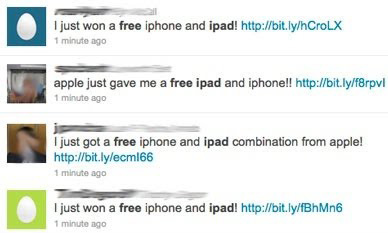 GFI Labs warns that a click on the offered URL makes the victim’s account automatically retweet the message, and according to the number of messages popping up, it seems that many people fell for it.

Luckily for many of them, bit.ly has blocked the destination site and, hopefully, is blocking similar links as they appear. The information about the registrant of the domain in question offers a bogus name and a Singapore address.

But, according to Twitter’s Del Harvey, the accounts sending the messages have been hacked: 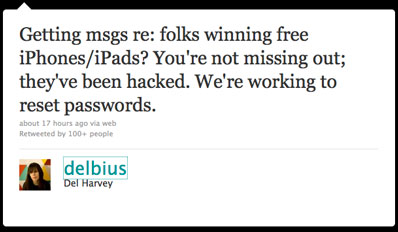 In any case, the offer is bogus, so you would do well not to follow the offered link.