A landmark EU-wide study of national privacy safeguards shows a decline in privacy protection across Europe and a steep increase in state surveillance over the lives of individuals.

The study includes a rating for EU member states and accession candidate countries. This rating pits Britain and Ireland fighting over the bottom of the privacy league. 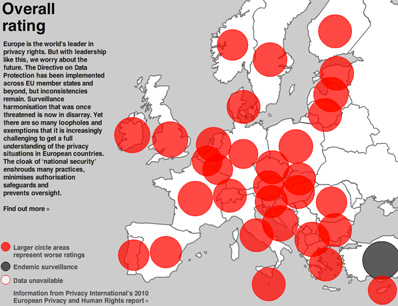 Brian Honan, the founder and head of Ireland’s first CERT, comments: “It is a worrying trend that authorities are trying to deal with perceived threats from the use of certain technologies that their reaction is to legislate for increased surveillance, and in some cases not having the appropriate oversight or controls on how that data is accessed. Europe, and Ireland, have been promoting our privacy protections as a major benefit for cloud providers to locate here. However, as those privacy advantages are slowly being eroded away by ill-thought out legislation that may no longer be the case. Increased surveillance of a people does not lead to more security, in fact it can lead to the opposite as activities are forced underground. It will be interesting to see how the case against the Data Directive will fare in the European Courts.”

“We also need to be clear that access to certain data by security services is essential in protecting society but that access needs to have proper judicial oversight & protection for individuals. The use of mega databases to store large information on citizens can also bring benefits but this needs to be done carefully with the proper levels of security, oversight and controls. Just because you can do something does not mean you should,” Honan added.

The year-long study, funded by the European Commission and backed by a 600-page analysis of privacy in 31 countries, was co-authored by London-based Privacy International, the Electronic Privacy Information Center in Washington DC and the Center for Media and Communications Studies of the Central European University in Budapest.

The country reports were also translated into native languages. For more details on the study go here.