250,000 Facebook users have become the unwitting members of a “dating” site whose authors claim is a “work of art” and not set up to make money, but Facebook is expectedly not entertained by their stunt. 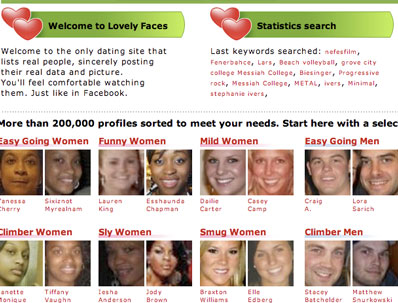 “Through special custom software we collected data from more than 1,000,000 Facebook users,” explain the authors – Paolo Cirio, a media artist, and Alessandro Ludovico, editor in chief of Neural magazine.

“What we collected is their ‘public data’ – some of their personal data (name, country, Facebook groups they subscribe to) plus their main profile picture and a few friend relationships. We built a database with all this data, then began to analyze the pictures that showed smiling faces.”

Once the database was ready, they used a face recognition algorithm to to “group” the faces into a few categories (see in the picture above) that describe how people define a person just by looking at their faces, without knowing anything about them.

“Face-to-facebook practically questions online privacy through one of the web’s most iconic platforms,” they write. “-Â¦ we’re not just making a sophisticated critical action against another giant online corporation, but we are also trying to formulate a simple hack that everybody can potentially use. Everybody can steal personal data and re-contextualize it in a completely unexpected context. And that shows, once more, how fragile and potentially manipulable the online environment actually is.”

To all of those people who are now “members” of the dating site and don’t want to be, the authors offer a way out: “Just write to us and we’ll remove your data instantly. This website is a work of art and we’re committed to avoiding any related annoyances.”

Wired reports that Facebook is looking into the possibility of taking legal action against Cirio and Ludovico.

The social network’s terms of service on automated data collection state that to do that, one must have Facebook’s express written permission. “We’re investigating this site and will take appropriate action,” says Facebook’s director of policy communications Barry Schnitt.

The dating site is currently unavailable, but it’s impossible to tell whether because the duo took it down or because of some technical error.

One thing is for sure, though – they did manage to bring the public’s attention to the fact that public available information is up for grabs and – hopefully – raise its awareness about the need to think twice about posting stuff online.