As a new participant to the RSA Conference, LynuxWorks demonstrated its LynxSecure high-performance, secure virtualization platform. 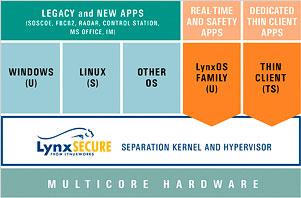 The LynuxWorks platform allows multiple guest operating systems and applications to run safely and independently on a single device. Originally built for security-critical military, medical and avionics embedded applications; this technology has now been extended to support the enterprise.

According to Robert Day, VP of Marketing at LynuxWorks, “At the RSA Conference we are showing that it is now possible to run multiple copies of the Windows OS, each held in their own secure enclave, running at near native-speed on a LynxSecure-based endpoint. It is now possible to secure corporate sensitive applications and data on a machine browsing the open Internet without compromising the performance or functionality of the system.”

He further explained that the same LynxSecure technology can be used to secure the next generation of devices and appliances based on Intel’s latest 2nd Generation Intel Core processors, allowing developers to build security into their new systems at the lowest level, and then use the hypervisor functionality built into LynxSecure to run legacy OSes and applications on this secure platform.