German-speaking Internet users are being targeted by a common scam with an unusual twist, warns Symantec. 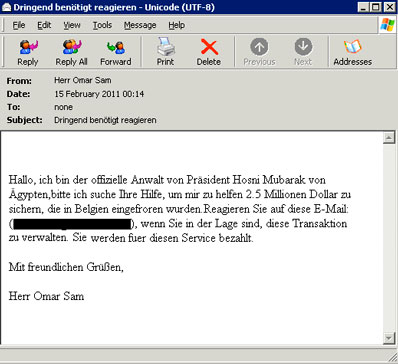 The well-known 419 (or advance-fee fraud) scam template has been modified and adapted to fit the current world events – specifically, the deposition of the Egyptian president Hosni Mubarak.

According to the e-mail – which was is supposedly sent by Mubarak’s lawyer – he asks for help in retrieving $2.5 of the president’s funds frozen in a Belgian bank account.

Given the fact that Mubarak’s assets around the world have been or are expected to be frozen, this claim might seem legitimate to some users. Hopefully, the poor spelling and lousy translation might trigger some suspicion.