Officials of the private liberal arts Reed College from Oregon are currently trying to take down a site for a bogus University of Redwood that was put up by unknown individuals and is using a mishmash of campus photos and content belonging to the College. 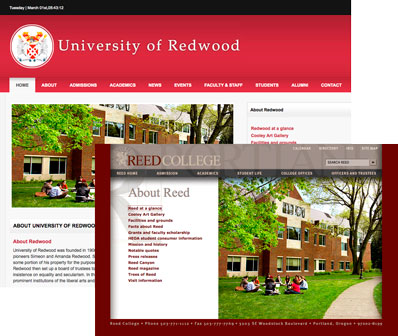 Reed College had its history and faculty apparently usurped by the fictitious university. Oregon pioneers Simeon and Amanda Reed – after which the College was named – have undergone a name change and became Simeon and Amanda Redwood on the pages of the University of Redwood site.

The bogus site is suspected to be a aimed at attracting students from Asia – mainly China and Hong Kong, who’s interest in studying in the US has seen a steep increase in the last few years. Martin Ringle, Reed College CTO, believes that the bogus University is collecting application fees and issuing rejection letters to the aspiring students.

According to The WSJ, the College officials have discovered the plagiarizing site after they saw it pop up among the results when doing Google searches of the names of its faculty. They reacted immediately and tried to take the site down by complaining to the site’s hosting provider Go Daddy.

And they succeed for a short while, but GoDaddy allowed it to be put back online after they supposedly made sure that the infringing material was removed. Although, I don’t know how they can claim it, since the site still contains photos of Reed College’s campus and false information.

College officials believe that the person(s) behind this scam are located in China. The address listed on the bogus website points to a mail-forwarding company from California, and the only other contact information is a fax number.