The number of threats in circulation has risen in comparison to last year. In the first three months of 2011, PandaLabs identified an average of 73,000 new malware strains, most of which were Trojans. Moreover, there was a 26 percent increase of new threats compared to the same period last year. 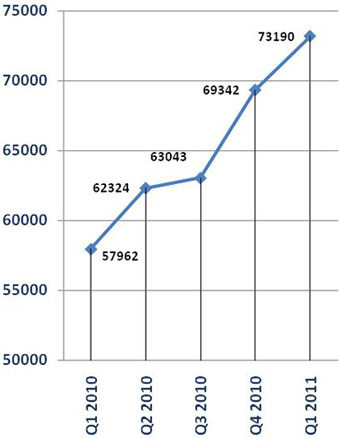 While PandaLabs observed a quarter-over-quarter increase of new malware in 2010, the rise was not nearly as notable as the one experienced over the last several quarters.

Trojans remain the most popular type of threat to computer systems, and now account for 70 percent of all new malware. This is unsurprising considering it can be incredibly lucrative for cybercriminals to commit fraud or steal money from Internet users through the online banking channel. 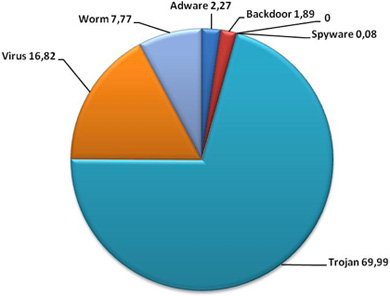 “The proliferation of online tools that enable non-technical people to create Trojans in minutes and quickly set up illegal business – especially when it can provide access to banking details – is responsible for Trojans’ impressive growth”, said Luis Corrons, technical director of PandaLabs.

Not all kind of Trojans grow at the same pace. Taking a look further at the subtypes of malware, PandaLabs found that Banker Trojans have decreased, bots have remained steady, and fake anti-virus or rogueware has descreased in popularity. However, the number of “downloaders” has increased significantly.

Downloaders are a subtype of Trojan that, once it has infected a user’s computer, connect through the Internet to download additional malware. Hackers often use this method because the downloader is lightweight – only containing a few lines of code – and can go completely unnoticed unlike other Trojans.