Wannabe cybercriminals were able to execute attacks with impunity and relative ease thanks to toolkits, pre-written software programs designed to steal information, rendering 2010 “The Year of the Toolkit” according to Trend Micro. 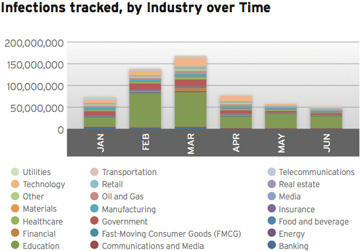 While toolkits have always been a part of the cybercrime underground, in 2010 they flourished and became an even bigger part of the overall threat landscape. Toolkits allow cybercriminal attacks to be conducted with far less effort and time, the effects of which can be seen in the explosive growth of threats in 2010.

United States, India got spammed the most

The crackdown of Spamit operations in October 2010 led to a decline in spam between November-December, a time when holiday spam is usually on the rise.

While overall global spam volume decreased, the U.S. received the most spam with India coming in second, due to the country’s growth in Internet usage and its use of English in most forms of formal communication. The countries that received the least amount of spam were Argentina and Israel.

Europe experienced the highest spike in spam, frequently written in Spanish and most of which were online casino and gambling themed due to the region’s more lenient gambling regulations. And Russia, a country where sending spam is not yet a criminal offense, was the top spam generator during Q4 2010. 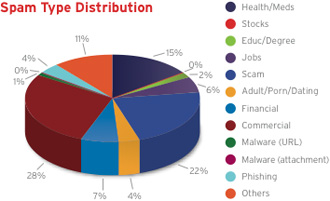 Most spam were pharmaceutical and health-care related

If you have an email account, chances are you received plenty of pharmaceutical and other health-related spam, which Trend Micro threat researchers said made up the majority of the spam tracked throughout the year. Throughout 2010, spammers also used email to disguise phishing and malware attacks that hit popular social networking sites, another hotbed for cybercriminals due its prolific communities of users.

United States, China had the most malware infections

During the summer of 2010, Trend Micro threat researchers discovered malware targeting the new Android OS and applications. By August 2010, the DroidSMS appeared, a malicious text message sending an application disguised as Windows Media Player. A week later, another application designed to send a user’s GPS location via HTTP POST came to the scene.

Trend Micro also discovered other malware targeting older smartphone OSs like Symbian. Cybercriminals are always on the lookout for any form of monoculture to serve as a large base of possible targets for scams or malware attacks. For example, the growing popularity of Android OS in smartphones, along with the OS’ open source code and vulnerable applications, has already contributed to an increase in attempts that target the OS.