The customers of a European bank have recently been targeted by a man-in-the-mobile attack featuring a SpyEye variant.

“The bank uses SMS based mTANs to authorize transfers,” explain F-Secure researchers. “The trojan injects fields into the bank’s webpage and asks the customer to input his mobile phone number and the IMEI of the phone. The bank customer is then told the information is needed so a ‘certificate’ can be sent to the phone and is informed that it can take up to three days before the certificate is ready.”

The “certificate” – actually a Trojan – contains various files, among which is the malicious sms.exe and a second installer that contains another executable whose sole task is to display the following message on the user’s phone: 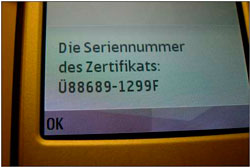 The message serves only to reassure and convince the user that the Trojan is actually the promised certificate and to prevent him from becoming suspicious.