As Japan has been struck again by a high-magnitude earthquake and warnings about a possible tsunami hitting the Japanese islands have been issued, malware peddlers have renewed their efforts and have been sending out emails and setting up pages with screenshots of videos about the tsunami – a click on which triggers the download of a malicious file. 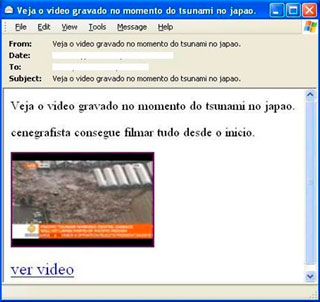 Judging by the language (Portuguese) and the fact that the malware in question is a Brazilian banking Trojan, it seems that these attacks are targeting exclusively the citizens of that country. it also seems that the attackers are Brazilian – the IP addresses involved in the attack have been traced back to Brazil.

English speakers should also be careful – Symantec researchers warn about the unabated stream of emails purportedly coming from charity organizations that ask for donations to help the Japanese population.

These emails usually contain requests for donations in the form of wire transfer payments through a popular service, since they are irreversible, untraceable, and require minimal identity checks.