A survey of 200 IT security executives from critical electricity infrastructure enterprises in 14 countries found that 40 percent of executives believed that their industry’s vulnerability had increased. Nearly 30 percent believed their company was not prepared for a cyberattack and more than 40 percent expect a major cyberattack within the next year. 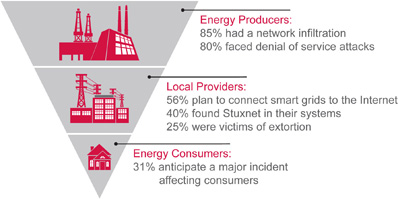 The report was commissioned by McAfee and produced by CSIS. Industry executives made modest progress over the past year in securing their networks, as the energy sector increased its adoption of security technologies by only a single percentage point (51 percent), and oil and gas industries increased only by three percentage points (48 percent).

“Ninety to 95 percent of the people working on the smart grid are not concerned about security and only see it as a last box they have to check,” said Jim Woolsey, former United States Director of Central Intelligence.

The study reveals that while the threat level to these infrastructures has accelerated, the response level has not, even after the majority of respondents frequently found malware designed to sabotage their systems (nearly 70 percent), and nearly half of respondents in the electric industry sector reported that they found Stuxnet on their systems. This threat to infrastructures also includes electrical smart grids, which are growing in adoption and expected to have exceeded $45 billion in global spending in 2015. 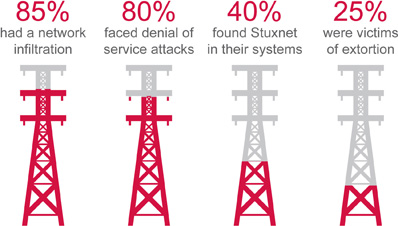 “What we are learning is the smart grid is not so smart,” said Dr. Phyllis Schneck, vice president and chief technology officer for public sector, McAfee. “In the past year, we’ve seen arguably one of the most sophisticated forms of malware in Stuxnet, which was specifically designed to sabotage IT systems of critical infrastructures. The fact is that most critical infrastructure systems are not designed with cybersecurity in mind, and organizations need to implement stronger network controls, to avoid being vulnerable to cyberattacks.”

Cyberattacks still prevalent: Eighty percent of respondents have faced a large-scale denial of service attack (DDoS), and a quarter reported daily or weekly DDoS attacks and/or were victims of extortion through network attacks.

Organizations failing to adopt effective security: Sophisticated security measures placed upon offsite users are in the minority, with only a quarter of those surveyed implementing tools to monitor network activity, and only about 36 percent use tools to detect role anomalies.

Security conscious countries: Brazil, France and Mexico are lagging in their security measures, adopting only half as many security measures as leading countries China, Italy and Japan. Concurrently, China and Japan were also among the countries with the highest confidence levels in the ability of current laws to prevent or deter attacks in their countries.

U.S. and Europe falling behind Asia in government involvement: Respondents in China and Japan reported high levels of both formal and informal interaction with their government on security topics, while the U.S., Spain and U.K. indicated little to no contact.