Credibility of photographic evidence may be extremely important in a variety of situations. Courts, news agencies and insurance companies may accept digitally signed photographs as valid evidence. If such evidence is forged, consequences can be severe. The most famous fakes include cases of fraud committed by enthusiast photographers, photo journalists, editors, political parties, and even the US Army.

ElcomSoft researched Nikon’s Image Authentication System, a secure suite validating if an image has been altered since capture, and discovered a major vulnerability in the manner the secure image signing key is being handled. In turn, this allowed the company to extract the original signing key from a Nikon camera. 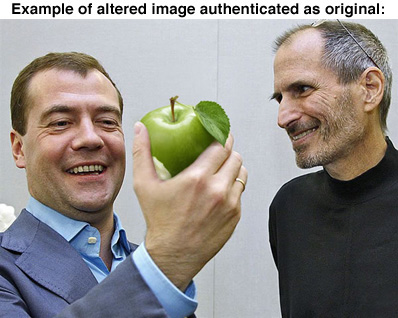 The vulnerability, when exploited, makes it possible to produce manipulated images with a fully valid authentication signature. ElcomSoft was able to successfully extract the original image signing key and produce a set of forged images that successfully pass validation with Nikon Image Authentication Software.

When designing a digital security system, it is essential to equally and properly implement all parts of the system. The entire system is only as secure as its weakest link. In the case of Nikon’s Image Authentication System, the company has not done at least one thing right.

The ultimate vulnerability lies in the way the image signing key is being handled. As the signing cryptographic key is handled inappropriately, it can be extracted from the camera. After obtaining the signing key, one can use it to sign any picture, whether or not it’s been altered, edited, or even computer-generated. The signed image will then successfully pass as a valid, genuine piece when verified by Nikon Image Authentication Software.

ElcomSoft has notified CERT and Nikon about the issue, and prepared a set of digitally manipulated images passing as originals when verified with Nikon’s secure authentication software. Nikon has provided no response nor expressed any interest in the existence of the issue.