48 percent of a Vordel study respondents noted security as a top concern for connecting from mobile cloud-based applications into the organization. 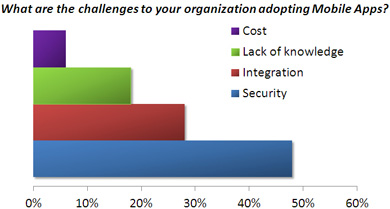 Additionally, 26 percent of respondents felt that integration complexities were a challenge. This is to be expected as programming for mobile apps uses such lightweight protocols as REST and JSON, whilst the enterprise application development environment is characterized by enterprise applications such as SAP, Oracle, and Microsoft .NET, which tend to support heavyweight standards such as SOAP, rather than REST and JSON.

Of note, 29 percent said they were planning to deploy mobile applications, but had not done so at this time. Additionally, 18 percent did not have any current deployment plans.

These survey results were based on a sample pool of 78 respondents from 50 organizations (Fortune 5000 firms and Government Agencies). The typical respondents were Enterprise Architects, Senior IT Manager and Chief Security Officers.