The past weekend has been rife with bad news that captured the attention of the greater public, and online scammers have wasted no time in taking advantage of it.

Facebook users have predictably been targeted with various scams. First came the ones exploiting the Oslo bombing news, and then followed those luring victims in with non-existent videos of the last moments of the famous and recently deceased singer Amy Winehouse.

According to Sophos, variations of “Leaked Video!! Amy Winehouse On Crack hours before death”, “Video leaked of Amy Winehouse’s death!!! Warning: Graphical Content” and “SHOCKING – Amy Winehouse’s Final Minutes” messages offering a link to the purported video unsurprisingly take users to pages where they are asked to like the page and to take a survey before being allowed to see it: 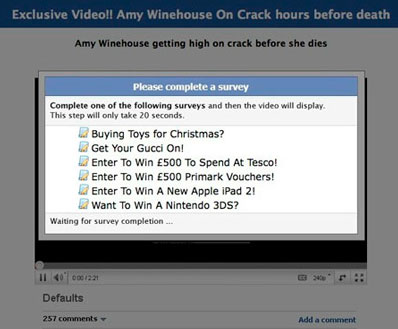 If you are one of the people who fell for this type of scam, be sure to remove any trace of it from your account (“Likes and interests” section, for example) and news feed, and to report the scam to Facebook.

Also remember that when it comes to unexpected and often shocking global news, legitimate news sites are always a better source of information than your Facebook friends.

Even when it seems that the offered link is the URL of a legitimate site, it might be better to go to that site by typing in the domain name in and then using the internal search feature in order to find the wanted news item.