A study by Pando Networks revealed striking disparities between the theoretical and real-world download speeds for British broadband users.

By tracking the end-user speeds for more than 400,000 users for the first six months of 2011, the study reflects a UK broadband experience that is far slower than many broadband providers advertise. 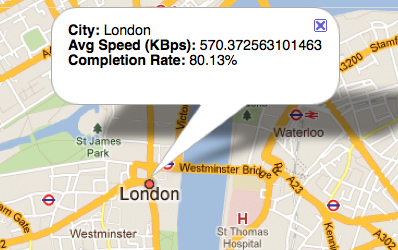 Across the whole of Britain the average download speed was 481KBps. Download speeds are also geography dependent, with major metropolitan areas tending to be faster than their rural counterparts.

Generally, institutions hosting their own networks experienced the fastest speeds, notably at universities, where speeds around 1000KBps were the norm.

Of the nation’s capitals, Edinburgh was the fastest with an average of 653KBps, followed by London with a moderate 570KBps. Cardiff had a less impressive 533KBps and Belfast an above-the-national-average 494KBps.

The data also suggests that wide disparities exist between the speeds offered by Britain’s most popular home broadband providers.

Be Broadband proved to be the fastest, averaging downloads of 594KBps, followed by Virgin Media’s service clocking at 552KBps. British Telecom was the slowest at 399KBps. Other notable results for speed were Sky Broadband at 534KBps, Entanet at 465KBps and TalkTalk at 450KBps.

Not only was BT the slowest of the large ISPs, but only 77% of downloads started by its users were completed, suggesting problems with connectivity or frustration with the slow speeds. Be Broadband proved to be the most reliable, with a completion rate of 84%.

An interactive, embeddable map of the location-by-location data is available here.