There is a significant gap in today’s enterprise IT defenses, as advanced malware and targeted attacks are easily evading traditional defenses, such as firewalls, intrusion prevention systems, antivirus, and Web/email gateways, according to FireEye.

99% of enterprises have had malicious infections entering the network each week with 80% of the enterprises facing more than a hundred new cases per week.

The bottom line: Today’s existing traditional enterprise IT defenses are not keeping up with highly dynamic, multi-stage attacks that cyber-criminals now use to attack enterprises and federal agencies.

Top categories of malware in the first two quarters of 2011.

The “Top 50” malware families account for over 80% of successful infections seen in the wild. In addition, the most prevalent attacks are Fake Antivirus scams and information stealing malware. 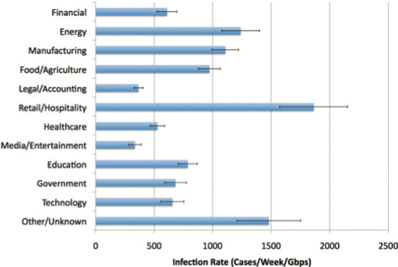 As criminals develop and invest in advanced malware, enterprises must also reinforce traditional defenses with a new layer of dynamic security that can detect these threats in real-time, and thwart malware communications back to command and control centers. This extra defense layer needs to be designed specifically to fight the unknown and zero-day tactics that dominate targeted and advanced, persistent threat (APT) attacks.