For the first time a Norton study calculates the cost of global cybercrime: $114 billion annually. Based on the value victims surveyed placed on time lost due to their cybercrime experiences, an additional $274 billion was lost. 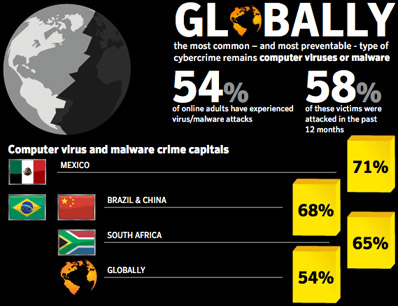 With 431 million adult victims globally in the past year and at an annual price of $388 billion globally based on financial losses and time lost, cybercrime costs the world significantly more than the global black market in marijuana, cocaine and heroin combined ($288 billion).

The report reveals that 10 percent of adults online have experienced cybercrime on their mobile phone. In fact, Symantec reported there were 42 percent more mobile vulnerabilities in 2010 compared to 2009 – a sign that cybercriminals are starting to focus their efforts on the mobile space.

The number of reported new mobile operating system vulnerabilities increased, from 115 in 2009 to 163 in 2010. In addition to threats on mobile devices, increased social networking and a lack of protection are likely to be some of the main culprits behind the growing number of cybercrime victims. 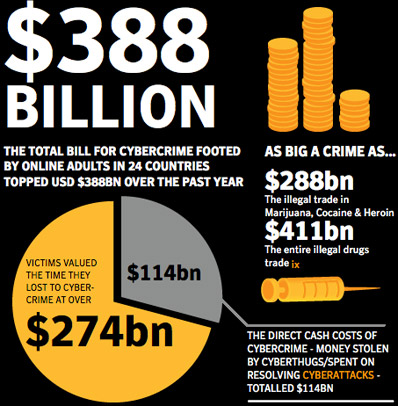 The study identifies men between 18 and 31 years old who access the Internet from their mobile phone as even more likely victims: in this group four in five (80 percent) have fallen prey to cybercrime in their lifetime. Globally, the most common – and most preventable – type of cybercrime is computer viruses and malware with 54 percent of respondents saying they have experienced it in their lifetime.

“There is a serious disconnect in how people view the threat of cybercrime,” said Adam Palmer, Norton Lead Cybersecurity Advisor. “Cybercrime is much more prevalent than people realize. Over the past 12 months, three times as many adults surveyed have suffered from online crime versus offline crime, yet less than a third of respondents think they are more likely to become a victim of cybercrime than physical world crime in the next year. And while 89 percent of respondents agree that more needs to be done to bring cybercriminals to justice, fighting cybercrime is a shared responsibility. It requires us all to be more alert and to invest in our online smarts and safety.”

The disconnect between awareness and action is further illustrated by the fact that while 74 percent of respondents say they are always aware of cybercrime, many are not taking the necessary precautions. Forty-one percent of adults indicated they don’t have an up to date security software suite to protect their personal information online.

In addition, less than half review credit card statements regularly for fraud (47 percent), and 61 percent don’t use complex passwords or change them regularly. Among those who access the Internet via their mobile phone, only 16 percent install the most up to date mobile security.