“Last month, we saw scammers out in full force,” said Christopher Boyd, senior threat researcher at GFI Software. “They tried to exploit the incredible public interest in the launch of the Harry Potter fan site Pottermore, and they concocted fresh schemes to impersonate government agencies in order to defraud the public.

In many cases, cybercriminals are recycling the same tactics. That underscores how much work still needs to be done to educate the public, but it also helps the security community anticipate new threats.”

The FBI recently issued a warning against fraudulent charity organizations soliciting donations for victims of Hurricane Irene, a tactic that cyber scammers continue to employ in the wake of natural disasters.

GFI recommends that users always remain wary of unsolicited emails claiming to help those affected by natural disasters, and only donate to relief funds through trusted, legitimate organizations.

GFI urges users to be on guard as the 10th anniversary of the terrorist attacks of Sept. 11 approaches. Users should be skeptical and avoid clicking on links and videos circulating through social networks and email. They should diligently confirm the validity of any requests they receive for financial assistance to victims, their families, first responders and memorials.

Trojans still dominated the month, making up 5 of the top 10 detections. 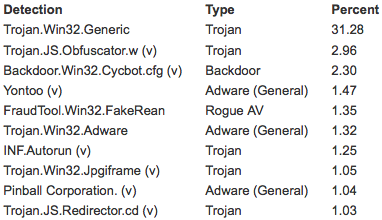