“There has been no significant improvement on that front, with 60 different fake store domains observed in July 2011,” he said and pointed out this is a problem shared by all search engines.

Among the trust-increasing techniques used by the developers of these fake stores is the copying of the look of a well known online store/service.

Here is an example: 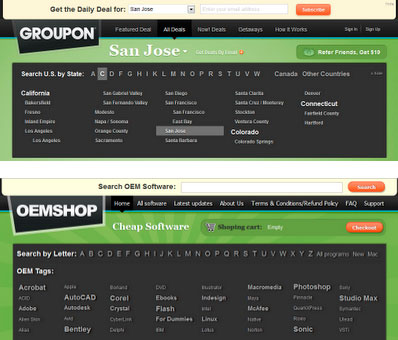 The first one is how the well-known and popular Groupon site looks like. The second one is the site of a fake store located at axisoftware.com, and it bears more than a little resemblance to the first one. Other pages of the fake store are also modeled after Groupon, but don’t work as well as it does.

“After entering my e-mail address, I was redirected to a payment website at lpstore.ws. Payment by VISA card then redirects to feriensoft.com. Mastercard is handled by screensavera.com, says Sobrier, and points out that users are currently more likely to encounter fake stores than fake AV.