Most Internet users know about the existence of software Trojans, but that of hardware ones is less known. They consist of integrated circuits that have been modified by malicious individuals so that when triggered, they try to disable or bypass the system’s security, or even destroy the entire chip on which they are located. 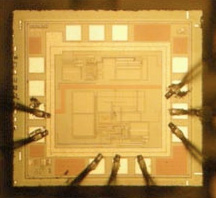 As hardware devices are almost exclusively produced in countries where controls about who has access to the manufacturing process are non-existent or, at best, pretty lax, government agencies, military organizations and businesses that operate systems critical to a country’s infrastructure can never be too careful when checking whether the devices they are planning to use have been tampered with.

There are a number of techniques for detecting hardware Trojans, but they are time- and effort-consuming. So a team of researchers from the Polytechnic Institute of New York University (NYU-Poly) and the University of Connecticut have decided to search for an easier solution, and came up with the idea of “designing for trust.”

Among those is the use of ring oscillators – devices composed of and odd number of inverting logic gates whose voltage output can reveal whether the circuit has or has not been tampered with – on circuits.

Non-tampered circuits would produce always the same frequency, but altered ones would “sound” different. Of course, sophisticated criminals could find a way to modify the circuits so that the output is the same, so the researchers suggest creating a number of variants of ring oscillator arrangements so that hardware hackers can’t keep track of them.

While the theory does sound good, the researchers have encountered some difficulty when it comes to testing it in the real world.

Companies and governments are disinclined to share what hardware Trojan samples they may have, since that would require sharing actual modified hardware that could tip off the researchers to their proprietary technology or can endanger national security.

Luckily for them, NYU-Poly organizes an annual Cyber Security Awareness Week (CSAW) white-hat hacking competition called Embedded Systems Challenge (this year’s edition is currently underway), for and during which students from around the country construct and detect hardware Trojans, and these samples are readily available to them and to the public.