New research published by Palo Alto Networks indicates explosive growth in global social networking and browser-based file sharing on corporate networks, with a 300 percent increase in active social networking compared with activity during the same period in the latter half of 2010. 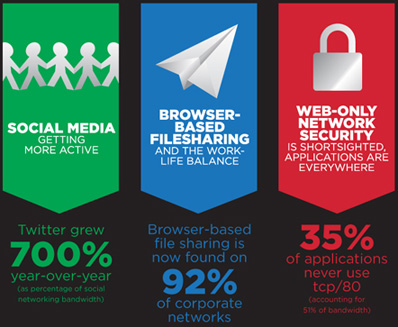 Social media use is more active
Twitter has gained significant mainstream traction in the workplace: Since October 2010, social networking usage patterns have become more active with bandwidth consumption for Facebook Apps, Social Plugins, and posting increasing from 5 percent (October 2010) to 25 percent (December 2011) when measured as a percentage of total social networking bandwidth. Twitter browsing at work alone grew by more than 700 percent year-over-year.

Widespread file sharing use requires a balanced response
File sharing sites continue to be used on most networks, appearing on the networks of 92 percent of the participating organizations. In total, 65 different browser-based file-sharing variants were found with an average of 13 being used in each of the analyzed organizations.

The report also explores a variety of risks associated with browser-based file-sharing applications, which varies by application and use case. However, the use of evasive techniques by these applications implies that they are often operating unchecked on corporate networks.

The 297 applications that use only TCP port 80 and no other port by default represent a mere 25 percent of the applications and 32 percent of the bandwidth observed, meaning that a standard web browsing-focused security model actually protects a minority of an organization’s traffic.

The Palo Alto Networks Application Usage and Risk Report provides a global view into application usage based on assessments of the raw application traffic from more than 1,600 enterprises between April 2011 and November 2011.