Merchants are making gains against fraud but the battle continues, according to CyberSource, a Visa company.

The fraud rate by order (the percentage of orders that turned out to be fraudulent) dropped from 0.9 percent in 2010 to 0.6 percent in 2011—the lowest in the 13 year history of the survey. But the cost of combatting fraud continues to grow. 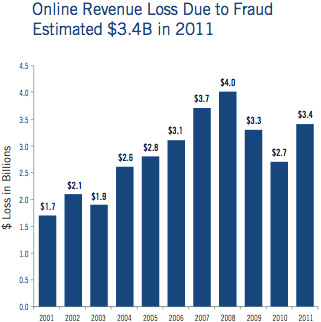 Dollar losses were up, manual review continued to climb, and merchants reiterated their concern that fraud is becoming more difficult to detect. 27 percent of respondents said they are engaged in mobile commerce and initial indicators regarding fraud in that channel are promising.

“The continued growth in eCommerce is a welcome development for merchants and the economy overall,” said Andrew Naumann, CyberSource Senior Business Leader, Fraud Management Solutions. “The bad news is that fraudsters took in a higher dollar volume, the first such increase we’ve seen since 2008. Our study shows merchants are working harder than ever to keep fraud in check, using more tools and reviewing more orders. Clearly the criminal element is growing more sophisticated.”

Selected findings from the 2011 surveys:

27 percent of merchants responding to the survey indicate they have made investments in true mCommerce channels (accept orders from a mobile app or mobile optimized browser). Among those tracking fraud rates in this comparatively new channel, the majority (92 percent) feel fraud is equal to or lower than that experienced with online orders.

The fraud rate by order dropped 33 percent, from 0.9 percent in 2011 to 0.6 percent. On average, merchants say 1 percent of online revenues were lost to fraud in 2011, a slight increase over last year’s 0.9 percent. That translates to an estimated 2011 merchant dollar loss of approximately $3.4 billion.

This is the first time merchants have cited an increase in the fraud rate by revenue since 2004. The lower fraud rate by order, accompanied by higher estimated revenue loss, means fraudsters are stealing more expensive items –$250 on average vs. $150 on average for a valid order. Looking at fraud rates by category of merchandise, consumer electronics were the hardest hit by fraudsters, followed by digital goods.

The former are among the most lucrative for resale, while orders for the latter are typically executed in real time, allowing little opportunity for further review. The largest merchants tend to have, year after year, the best results in fighting fraud, a reflection of those organizations’ use of more fraud detection tools and human resources.

The mostly flat estimates of fraud rate by revenue demonstrate merchant success in fighting fraud, but at a cost – they are using more tools and systems, and reviewing more orders. In 2011, merchants used an average of 4.9 fraud detection tools to automatically screen orders, compared to 4.6 the year before. Merchants with more than $25 million in annual online revenues used about eight tools in 2011 (vs. 7.4 in 2010).

Manual review is an effective but expensive strategy—typically comprising 52 percent of merchants’ fraud management budgets. Merchants that engage in manual review (75 percent of the sample), looked at 27 percent of their orders in 2011, up from 24 percent the prior year. To complete manual screening, merchants reported review staff accessed an average of 4.2 systems and information sources in 2011, continuing the upward (more expensive and time-consuming) trend seen since the 3.7 systems reported in 2009.

Most merchants (75 percent) say they foresee no increase in staffing going into 2012. Yet eCommerce continues to grow steadily, compelling merchants to work even harder to control their fraud management costs. Merchants in 2011 ultimately accepted 75 percent of the orders that they manually reviewed, of which 6 percent turned out to be fraudulent—ten times higher than the overall 0.6 percent fraud rate by order. These figures suggest better pre-screening and more reviewer training are called for.

One quarter of respondents said their company had stopped accepting international orders altogether due to the fraud risk—50 percent of that group specifically citing Nigeria as a high risk area. Merchants looking to grow their international sales channel may need to employ additional tools to detect sophisticated fraud, such as global transaction activity modeling, website behavior analysis, device fingerprinting, and IP geolocation.