Rogue Facebook applications were at one point in time extremely popular with scammers, but users getting wise regarding that approach have made the crooks steer clear of them for a while.

But as Facebook gains more and more users by the day, the scammers have obviously concluded that the time has come to try the same tactic on them and they were not wrong in their assumption.

Users are lured in with the promise of finding out how many hours they have spent on the social network in the last month. By following the offered link, they land on a Facebook page that requests of them to “like” it in order to access the wanted information.

As it turns out, it seems that a great number of people is ready to do that, as the page has been “liked” by over 550,000 users already!

Once that step is effected, the victims are required to give some permissions to a rogue app: 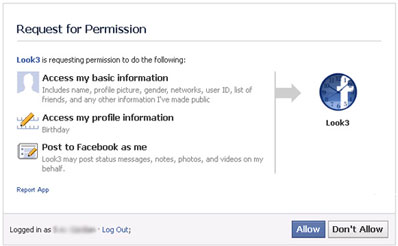 “Clicking ‘Allow’ will give the scammer access to your Facebook data at any time and the application will be able to post to Facebook as you. This will allow them to spam their scam messages to all of your friends. This particular application is called ‘Look3’, but this page is known to use multiple Facebook apps,” Facecrooks warns.

Once the rogue application is installed, the victims are required to jump through another hoop – they are asked to complete a survey.

In the end, the number of hours that are written on the message that gets posted on their walls in order to lure other user in is completely bogus, but the scammers have managed to get access to a lot of the victims’ information and have gained the permission to post messages in their name, not to mention they earned some money from the completed survey.

The page in question still hasn’t been taken down by Facebook, and other similar ones offer the same or similar deals (more “Like” buttons to be pressed, etc.)

If you have fallen for the scam, clean up your newsfeed and profile, and remove the rogue app by going to Account Settings/Apps.