A drop in the price asked for the latest version of the SpyEye botnet has security researchers worrying that users might soon be targeted with an increasing amount of infection attempts.

A Pastebin entry detailing the offer of SpyEye v1.3.48 – with the newest software, injection types and plugins – for only $150 has been recently spotted by McAfee researchers (click on the screenshot to enlarge it): 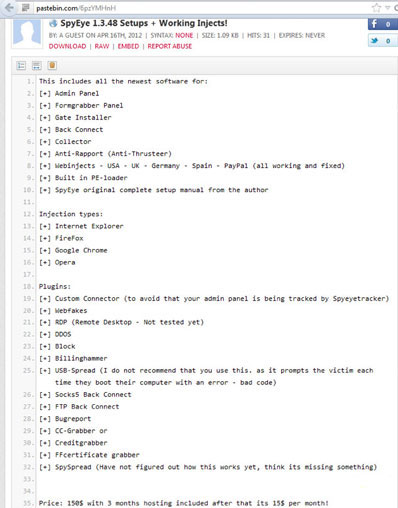 The price, which includes three months of free hosting, is ten times smaller than the one typically asked for for the same package on a number of freelancing project websites.

The newest version of the botnet does not offer many improvements over the previous ones – not that that lessens its effectiveness. As a reminder, the source code of SpyEye v1.3.45 has been previously leaked online.

“Bad guys or script kiddies are willing to pay a lot of money for this popular botnet,” point out the researchers. “With people selling this botnet for such low prices and with the availability of leaked code, we may see a rise in this botnet’s activities and control servers.”

Still, the researchers doesn’t say whether they have tried to contact the seller, so there’s always a possibility that the offer is bogus or a scam set up to fleece inexperienced would-be botnet herders.