A Trojan masquerading as “Grand Theft Auto 10th Anniversary Edition” for Android has lately been spotted being offered on third-party Russian websites.

More experienced users will spot that among the permissions asked by the app is also the one for sending out text messages from it: 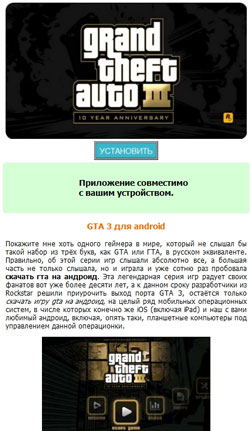 “An app wanting to send SMS messages downloaded from a random Russian website touting a version of a game you can just obtain from the Google Play market? What could possibly go wrong, apart from everything,” comments GFI’s Chris Boyd.

The Trojan in question is a version of OpFake, a piece of malware that has in the past also been modified to target Windows Mobile and iPhone users by posing as an Opera Mini updater, and is currently a very popular with scammers.

It’s chief goal is to send out costly text messages to a predefined premium rate number, but this variant also offers links to sites where the user can download additional classic games – most likely than not also bundled with malware.