Today’s the day when Facebook has officially become a publicly traded company, after founder Mark Zuckerberg rang the bell and officially opened trading on the Nasdaq exchange.

For months now, speculation about what the company’s initial public offering (IPO) abounded, and many individuals put themselves in line for buying shares. As the demand for them soared, so did the interest of scammers who have been waiting for the right time to pounce.

Symantec researchers have spotted on Thursday a scammy email doing rounds, and trying to trick users into parting with their hard-earned cash (click on the screenshot to enlarge it): 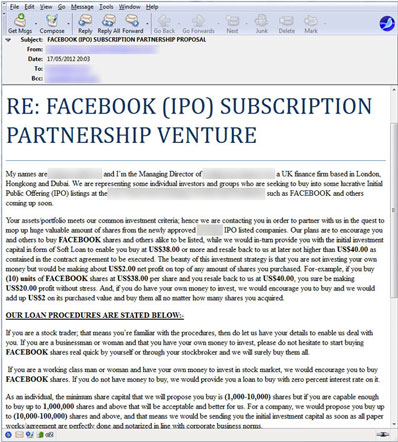 In short, the scammers try to convince the users that they can borrow money from them to buy Facebook shares and then sell the stock to them for a greater price and pocket the difference. To be able to borrow the money, the users need to pay a fee.

Luckily, there are many things that point to the real nature of this email.

“The financial company claims to have offices in London, Hong Kong, and Dubai, yet the phone number included in the message is an answering service with a Sacramento, California phone number,” the researchers point out.

Also, the email address from which the email is sent doesn’t look like it belongs to a legitimate company, since its hosted on a free Web-based email service.

Still, users are advised to be careful when considering unsolicited financial offers, as future ones might be more legitimate looking.