Have you ever decided not to post an update because you didn’t want your entire social network to be privy to every intimate detail of your life? Of course you have. That’s why a new app is eliminating this common inhibition by allowing users to create different personas, or “Avatars,” with each being visible only to selected groups of people. 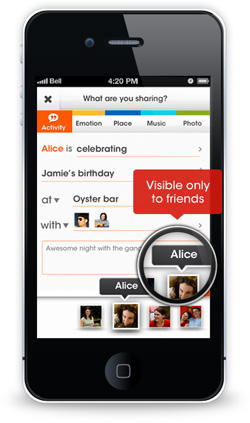 Hmmm flips the concept of “lists” and “circles” on its head by giving users the ability to create different Avatars based on the context of what they’re sharing and whom they’re sharing it with.

“We all have slightly different identities based on our surroundings, so our brain is not naturally programmed to think in the form of just one “I’ interacting with multiple “circles’ or “lists’ of people,” said Archana Patchirajan, co-founder of Hmmm. “With “circles’ or “lists,’ the perception flows from outside-in, whereas with Avatars it flows from inside-out. It’s very subtle, but so much more natural.”

The minute you step into your office, your tone, mannerism and outlook changes and you’re a much different person from the one who went out with close friends for happy hour the night before.

At any given point in time, your brain is aware of “who you are” and with that explicit knowledge comes the freedom to act without worrying about who else is watching. This is precisely what Hmmm lets you achieve by letting you build, personalize and wear different Avatars.

Another feature that sets Hmmm apart is its first-of-its-kind inference engine, a component of the app that helps users connect the dots and derive life patterns based on their Hmmm story. Hmmm crafts life stories capable of recording that you were really happy 17 times last month, and that the things that made you happy were finishing a 10K run while listening to The Killers, wrapping up a productive day at work where you had Illy’s coffee at 4 p.m., eating dinner at Rosa Mexicana where you posted two photos, and having a shopping therapy session in SoHo.