The 2012 UEFA European Football Championship kicks off in Poland on Friday, and scammers are trying to trick football fans into thinking the organizers have selected them as winners of a huge money prize.

The subject line of the email received by potential victims says “UEFA Poland-Ukraine Euro 2012 Winning Notification”. Otherwise, the message contains no actual text, forcing those who want to know more to open the attached PDF file (click on the screenshot to enlarge it): 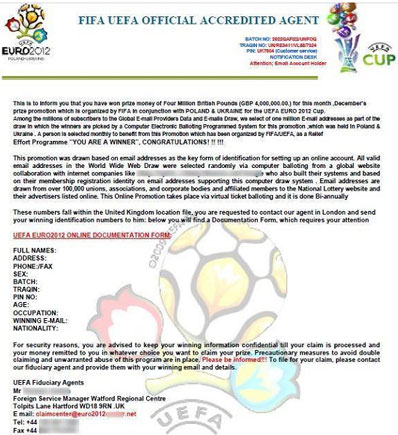 The scammers used the official logo of the manifestation to lend credibility to the message, but the text itself leaves something to be desired.

“Among the millions of subscribers to the Global E-mail Providers Data and E-mails Draw, we select of one million E-mail addresses as part of the draw in which winners are picked by a Computer Electronic Balloting Programmed System for this promotion, which was held in Poland & Ukraine,” it claims, and the alleged prize is of “Four Million British Pounds.”

The recipients are asked to share a lot of personal and other information in order to “prove” their identity, including their name, address, age, occupation, and phone number, Symantec researchers warn. If they make the mistake of responding to the email, they are likely to be asked for advance fees in order to be able to collect the prize.