Users who are in the market for tools that are supposedly able to hack someone’s Facebook account should be extremely careful when being faced with such an offer.

Trend Micro’s Smart Protection Network has recently unearthed a suspicious file that claims to be such a tool (“Facebook Hacker Pro”), and which obviously can come in hand only if its user has physical access to the machine of the user whose Facebook account he wants to crack.

“Based on our analysis of the setup file, it behaves like an ordinary installer that displays an end-user license agreement (EULA) and gives users the option to save the program in their preferred folder,” note the researchers. “Installing the setup file drops the malicious file Toolbar.exe in the users’ temporary folder without their knowledge.”

In order for the bogus cracker to “work”, the user is required to enter the target’s email, name or Facebook ID into it. After a few minutes, it says that a password file has been located but that in order to view it, the user must obtain a product key for the software, which costs $29.99.

If he does pay up, he will be shown some passwords: 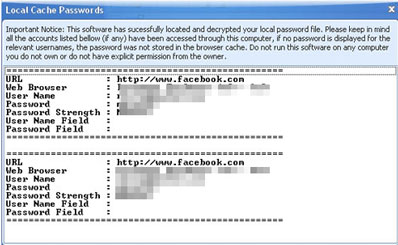 “But how did the program obtain these? Simple: the program downloaded and used a free third party application, designed to recover and display saved passwords in the users’ local browser cache. Thus, the retrieval of the credentials will only work for users who have passwords stored in their systems,” the researchers explain. “The said third party app is a legitimate password recovery, but was used maliciously in this attack.”

Other similar offers have also been discovered, and end up with the user’s machine getting infected with a keylogger.

Either way, you might say that the users who search for such tools end up getting what’s coming to them.